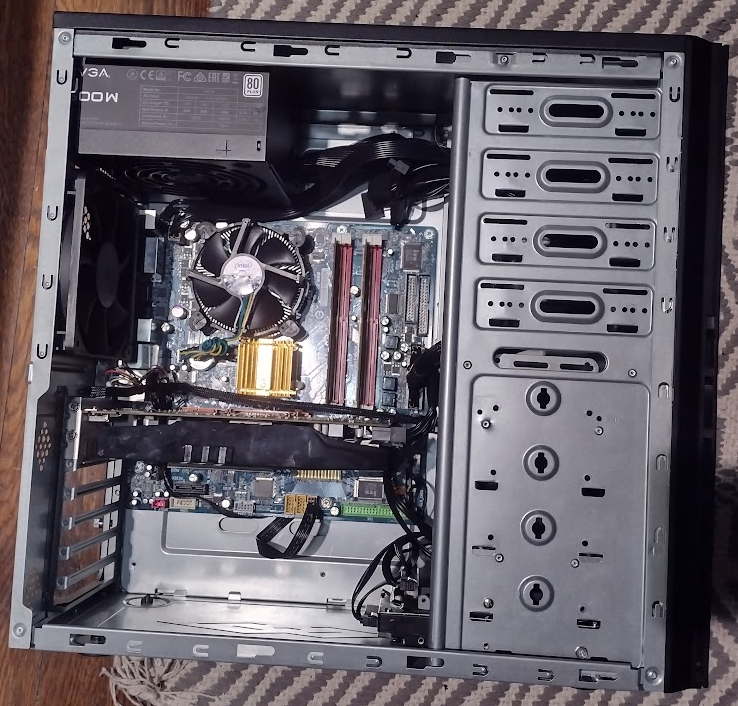 So this is my Windows XP gaming machine, the hardware might be more of the Vista era, but I don't think anyone that had the choice ran Vista back then, I sure as hell did not.

A 3GHz dual core CPU from 2008, slightly better CPUs were released at the time like the E8500 and E8600 but this is already more than powerful enough to run anything you'd want to run on this kind of machine. I did not go for a Core2Quad as barely any games from the XP era can use 4 cores efficiently.

Not the sickest motherboard out there, but it's a reliable overclocker and I found it for super cheap, does what I need it to do and it's all that matters.

Mid-range graphics card from 2010, this is hardware from early Windows 7 times, but a lot of people were still running XP at the time so I don't feel bad for including it in this build (I had it laying around), it's got stable drivers and great XP support.

The amount is okay, they run in dual channel: realistic for an XP system at the end of it's reign, but the frequency is super low, like for the GPU it's what I had laying around, it does an okay job for now.

Cheap Antec mid-tower case I had in storage. I covered it in stickers, some of them homemade, the frogs are just funny looking, there's no messages or politics behind them.

I needed a power supply, it has decent enough reviews and was cheap.

This machine does need an optical drive, preferably some SATA DVD-R Lightscribe burner, I don't have anything of the sort on hand right now, I'll grab one when the opportunity presents itself.

Cooling: Already got two good PWM fans as intake and exhaust but I could do with an actual third party heatsink for the CPU.

And that's all I can think of, maybe I could add a card reader to populate the 3.5" bay in the front but that's about it, I'm super satisfied with this build!